The Emperor card is a father figure symbolizing authority, structure, and leadership. The fourth card of the Major Arcana connects you to your ability to instruct and guide others. The Emperor calls on you to evaluate your use of authority and remain mindful of consciously exercising your power in a way that empowers others.

“I embody my authority and leadership. I use my personal power and influence with integrity in order to create a just and stable world for myself and others.”

Allegory of The Emperor

After I learned the first three numbers, I was given to understand the Great Law of Four–the alpha and omega of all.

I saw the Emperor on a lofty stone throne, ornamented by four rams’ heads. On his forehead shone a golden helmet. His white beard fell over a purple mantle. In one hand he held a sphere, the symbol of his possession, and in the other, a sceptre in the form of an Egyptian cross–the sign of his power over birth.

“I am The Great Law,” the Emperor said. “I am the name of God. The four letters of his name are in me and I am in all.”

“I am the beginning; I am action; I am completion; I am the result.”

“For him who knows how to see me there are no mysteries on earth.”

“I am the great Pentacle.”

“I am the Logos in the full aspect and the beginning of a new Logos.”

And while the Emperor spoke, his helmet shone brighter and brighter, and his golden armour gleamed beneath his mantle. I could not bear his glory and I lowered my eyes. When I tried to lift them again a vivid light of radiant fire was before me, and I prostrated myself and made obeisance to the Fiery Word.

It should be understood that The Emperor card ,and that of the Empress, do not precisely represent the condition of married life, though this state is implied. On the surface, as I have indicated, they stand for mundane royalty, uplifted on the seats of the mighty; but above this there is the suggestion of another presence.

They signify, the male figure especially, the higher kingship, occupying the intellectual throne. Here we see the lordship of thought rather than of the animal world. Both personalities, in their own way, are “full of strange experience,” but this is not the same wisdom which draws from a higher world. The Emperor has been described as the will in its embodied form.

The Emperor, by interpretation, is the spouse of The Empress. He is occasionally represented as wearing,
in addition to his personal insignia, the stars or ribbons of some order of chivalry.

A man is seated in profile. This man holds in his right hand the scepter, the symbol of creation or of Venus. The scepter is held in the right hand to indicate his active influence. The man is bearded and wears a helmet with twelve points (six on each side). He is seated upon a cubic stone, which bears the figure of an eagle. The Emperor’s helmet indicates the rule of Divine Will in the Universe, and its universal action in the creation of Life.

Significations of The Emperor

The Meaning of The Emperor Card Throughout History

Various Names For The Emperor Card

He is crowned (and leaning against a throne, his legs form a cross, and beside him, beneath his left hand, is a shield blazoned with an eagle). In his right hand he bears a scepter similar to that of the Empress. His body and arms form a triangle, of which his head is the apex, so that the whole figure represents a triangle above a cross. He represents Realization. 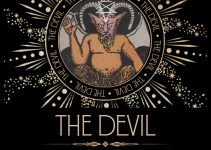 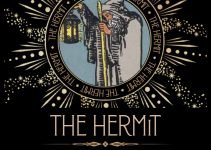