The Lovers card is a symbolic portrayal of duality, choice, and the power of relationships in a larger sense. This card appears when you are at an important crossroads in your life. On a romantic level this card may represent a choice between potential partners. It can also mean you have approached an important moment of resolution within your relationship. A decision to leave your current partnership in order to gain freedom or to strengthen your intimacy through renewed commitment.

In a spiritual sense, this card may mean choosing between a longer path of spiritual growth or the shorter path to gratification of the senses. On a cosmic level, the sixth card of the Major Arcana represents choosing between two opposing forces and indicates the time has come for you to decide which path you will take.

Allegory of The Lovers

I saw a blooming garden in a green valley, surrounded by soft blue hills. In the garden I saw a Man and a Woman naked and beautiful. They loved each other and their Love was their service to the Great Conception, a prayer and a sacrifice; through It they communed with God, through It they received the highest revelations; in Its light the deepest truths came to them; the magic world opened its gate; elves, undines, sylphs and gnomes came openly to them; the three kingdoms of nature, the mineral, plant and animal, and the four elements—fire, water, air and earth—served them.

Through their Love they saw the mystery of the world’s equilibrium, and that they themselves were a symbol and expression of this balance. Two triangles united in them into a six-pointed star. Two magnets melted into an ellipsis. They were two. The third was the Unknown Future. The three made One. I saw the woman looking out upon the world as though enraptured with its beauty. And from the tree on which ripened golden fruit I saw a serpent creep.

It whispered in the woman’s ear, and I saw her listening, smiling at first suspiciously, then with curiosity which merged into joy. Then I saw her speak to the man. I noticed that he seemed to admire only her and smiled with an expression of joy and sympathy at all she told him.

“This picture you see, is a picture of temptation and fall”, said the voice.

“What constitutes the Fall? Do you understand its nature?

“Life is so good”, I said, “and the world so beautiful, and this man and woman wanted to believe in the reality of the world and of themselves. They wanted to forget service and take from the world what it can give. So they made a distinction between themselves and the world. They said, “We are here, the world is there.” And the world separated from them and became hostile.

“Yes”, said the Voice, this is true. “The everlasting mistake with men is that they see the fall in love. But
Love is not a fall, it is a soaring above an abyss. And the higher the flight, the more beautiful and alluring appears the earth. But that wisdom, which crawls on earth, advises belief in the earth and in the present. This is the Temptation. And the man and woman yielded to it. They dropped from the eternal realms and submitted to time and death. The balance was disturbed. The fairyland was closed upon them. The elves, undines, sylphs and gnomes became invisible. The Face of God ceased to reveal Itself to them, and all things appeared upside down.

“This Fall, this first sin of man, repeats itself perpetually, because man continues to believe in his separateness and in the Present. And only by means of great suffering can he liberate himself from the control of time and return to Eternity—leave darkness and return to Light.”

The symbolism of The Lovers has undergone many variations throughout history. In the eighteenth century form, this card was a depiction of married life. A father and mother, with their child placed between them, and the pagan Cupid above. The Cupid is of love beginning rather than of love in its fulness, guarding the fruit thereof. The card is said to have been a symbol of conjugal faith. The figures were also believed to have signified Truth, Honor and Love. The card has these qualities but also contains other and higher aspects.

The figures suggest youth, virginity, innocence and love before it is contaminated by gross material desire. This is the card of human love, truth and the life. It replaces, the old card of “marriage” and or the historical image depicting a man caught between vice and virtue. In a very high sense, the card is a mystery of the Covenant. The woman signifies an attraction towards the sensitive life.

This card contains concept of the Fall of Man. However, the woman represents a Secret Law of the Providence; the protective care of God or of nature as a spiritual power, rather than a willing and conscious temptress. It is through her lapse in focus that man shall arise, ultimately, and only by her can he complete himself. The Lovers card symbolizes the great mystery of womanhood.

The Lovers card shows a great winged figure, beneath the sun’s zenith with arms extended, casting down it’s influences over humanity. In the foreground are two human figures. Unveiled before each other, the figures are male and female, representing Adam and Eve when they first occupied the paradise of the earthly body. Behind the man is the Tree of Life, bearing twelve fruits. Behind the woman is the Tree of the Knowledge of Good and Evil ; the serpent is twining round it.

A beardless youth (our Juggler of the 1st card), but without his hat, is standing motionless in the angle where two roads meet. His arms form a diagonal cross upon his breast. Here the man is not one of the Initiates. He does not know how to direct the magnetic currents of the Astral Light; he is therefore plunged in the antagonism of the different ideas which he cannot master.

Two women, one on his right, the other on his left, each with one hand upon his shoulder, point to the two roads. The woman on the right has a circle of gold upon her head, the one on the left is disheveled and crowned with vine leaves. The two arms of the Juggler, expressing the positive and negative, the two columns of the temple of Isis, expressing necessity and liberty, are here personified by the two women, who represent Vice and Virtue.

The future of the young man depends upon the road which he chooses, whether he becomes one of the Initiates, (The Mage), or the rash thunder-stricken personage (The Tower). The spirit of Justice floats above this group in a radiant halo; he bends his bow and aims the arrow of Punishment at the personification of Vice.

A profound symbol indicating that if man chooses the path of Virtue he will not be left unaided. Devine protection will assist him to overcome vice. In short, this hieroglyphic expresses the struggle between the passions and conscience, the antagonism of ideas. But this antagonism is also the most powerful natural producer that exists in the world, when it resolves itself into LOVE, which attracts the opposing forces and unites them for ever.

The Meaning of the Lovers Card Throughout History

Various Names for the Lovers Card

This is usually described as representing Man between Vice and Virtue, while a winged genius threatens Vice with his dart. It is usually considered to mean Proof or Trial; but I am inclined to suggest Wise Disposition as its signification. 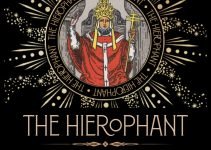 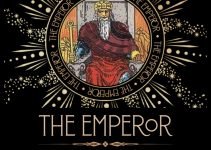