The Wheel of Fortune card symbolizes flux, fortune and spiritual fortitude. Life is about to do a somersault and your well-being will depend on your ability to stand within the spiritual eye of the storm. Trying to slow things down will only loosen your grip. Control is an illusion and resistance is counter-productive. Attempting to fight the turning of the wheel will cause you to lose your balance as the material world spins before your eyes. Solace and clarity can only be found by practicing radical acceptance and remaining spiritually centered.

The tenth card of the major arcana appears when you are about to experience an absolute game-changer. In short, this card signifies a turning or the tide or a reversal of fortune. Remaining steadfast will allow you to keep your eyes open as the wheel turns, letting you identify any missteps that lead to potential misfortune. You will also be able to recognize the signs that are pointing you toward unexpected opportunities. You cannot control every event in your life, but you can always decide how you will respond to the chaos and uncertainty of the churn.

“I remain grounded through embracing the ever-changing nature of life and trusting in the cyclical nature of the universe. I honor my own ability to navigate change and create my own luck.”

Allegory of The Wheel of Fortune

I walked along, absorbed in deep thought, trying to understand the vision of the Angel. And suddenly, as I lifted my head, I saw midway in the sky a huge, revolving circle covered with Kabalistic letters and symbols. The circle turned with terrible velocity, and around it, falling down and flying up, symbolic figures of the serpent and the dog revolved; above it sat an immovable sphinx.

And I heard the voices of Zarathustra’s beasts:

“All go, all return,”…the wheel of life ever turns. All die, all flourish again…the year of existence runs eternally.

“Existence begins at every moment. Round each “here” rolls “there”. The middle is everywhere. The way of eternity is a curve”.

In the Wheel of Fortune card I have followed the reconstruction of Éliphas Lévi and used Egyptian symbolism. The symbolism is, of course, not exclusively Egyptian, as the four Living Creatures of Ezekiel occupy the angles of the card, and the wheel itself follows Ezekiel’s vision. I have also chosen to present Typhon in his serpent form. With the French occultist, and in the design itself, the picture stands for the perpetual motion of a fluidic universe and for the flux of human life. The Sphinx is the equilibrium.

The depiction of the word “Taro” has been counterchanged with the letters of the Divine. It now reads “Rota” and is inscribed on the wheel. Providence is implied throughout the image and is exemplified by the four Living Creatures. Sometimes the sphinx is portrayed sitting on a pedestal above, which symbolizes the essential idea of stability amidst movement. Behind the general ideas expressed in the symbol, there also lies a helplessness in the face of fate.

The Wheel of Fortune Card Imagery

Historically, the Wheel of Fortune is said to have had seven spokes. In the eighteenth century, the ascending and descending animals were fairly nondescript and one of them has a human head. At the top of the wheel was another monster with the body of an undefined beast, winged, with a crown on its head. It carried two wands in its claws. These animal have now been replaced by a Hermanubis (Hermes/Anubis) rising with the wheel, a Sphinx sitting at the top and a Typhon on the descending side.

The Wheel of Fortune suspended upon its axis. To the right, Anubis, the genius of good is ascending. To the left, Typhon, the genius of evil is descending. The Sphinx is balanced upon the center of the wheel, holding a sword in its lion claws.

Significations of the Wheel of Fortune

The Meaning of the Wheel of Fortune Card Throughout History

Various Names for the Wheel of Fortune Card

Card X: The Wheel of Chance
(Wheel of Fortune)

A wheel of seven spokes (the two halves of the double-headed cards make it eight spokes, which is incorrect) revolving (between two uprights), On the ascending side is an animal ascending, and on the descending side is a sort of monkey descending; both forms are bound to the wheel. Above it is the form of an angel (or a sphinx in some) holding a sword in one hand and a crown in the other. This very complicated symbol is much disfigured, and has been well restored by Levi. It symbolises Fortune, good or bad. 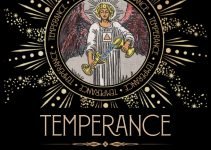 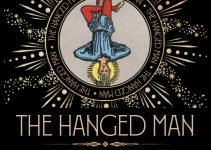